by The Informer
in News
Reading Time: 2min read

The President who was accompanied by the Cabinet Secretary of Interior Security Dr. Fred Matiang’i said that the government continues to implement initiatives aimed at improving police officer’s welfare; working and living conditions among them being expansion of medical and housing schemes.

“We understand that in a dynamic operating environment characterized by emerging and asymmetrical threats, investment in modern technology and cutting-edge training is instrumental for 21st Century law enforcement,” the President said.

The president said that his administration recognizes the importance of security in the realization of peace and sustainable social economic development and that is the reason he has paid particular focus on the security sector since he come into office.

He also challenged the security sector to collaborate more with the public in the fight against crime in order to attain greater success.

Isaac Mwaura re-admitted back to the Senate

Five teenagers arrested over spate of robberies in Nyali

“Going forward, our security sector will adopt greater collaborative approaches with related agencies both within the country as well as colleagues in other nations,” the President said. 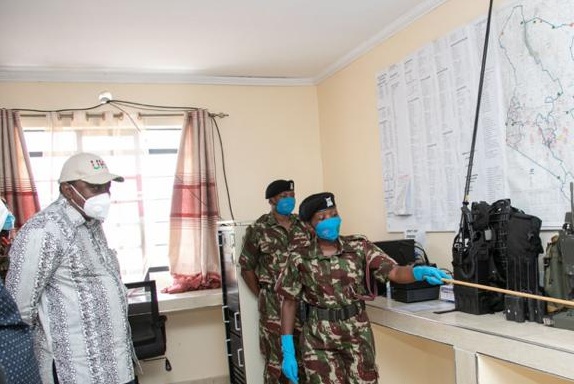 He advised that community involvement is critical to mission success hence officers in the security sector must cultivate a community-friendly image, be courteous, be approachable and be embodiments of the highest standards and ideals of the service.

“Since you became President in 2013, the unprecedented changes we have seen in the security of our country and the level of investment that has gone into the security sector is actually testament to your level of interest and focus in securing our people, our property and the country,” Dr Matiang’i said.

The President said despite competing national interests, including the fight against Covid-19, the government will continue investing in equipment, technology and training to enhance the effectiveness of the police and other security agencies.

He also inspected the ongoing construction of a modern hospital and flagged off a fleet of thirty five patrol vehicles donated by the US Government to beef up Kenya’s anti-terrorism efforts.

Prosecutors to use the ‘missing’ witness statement against lawyer Paul Gicheru

by Joy Kyalo
0
No Result
View All Result