by The Informer
in News, Politics
0

The 2019 Census released on Monday provides the clearest picture of all regions’ numbers that will influence the 2022 showdown. Politicians know where they must hunt for votes.

Census figures will also be crucial in demarcating boundaries, another electoral consideration, and in the allocation of resources to the counties as well as national planning.

The Census results show that the Jubilee political bastions of Mt Kenya, Rift Valley and Northeastern have a total of 22.4 million people.

With high population numbers, the regions will also have a big share of the billions of shillings allocated to the 47 counties each year.

The census figures show that Kenya’s population has increased four times from 10.9 million in 1969 to 47.6 million in 2019, with an average growth of one million people annually.

An analysis of the figures released by the Kenya Bureau of Statistics shows that Central Kenya has a population of 5.4 million, while Upper Eastern counties have a total of 2.5 million Kenyans. 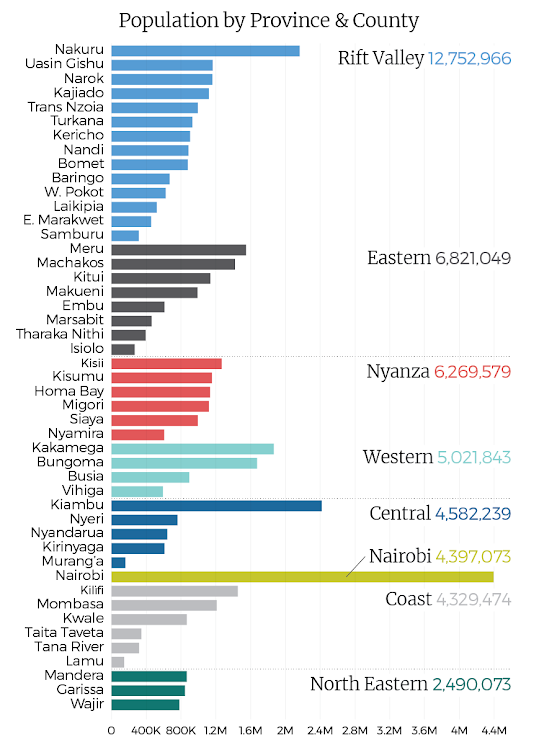 This means that the larger Mt Kenya region with eight counties has a total of slightly more than eight million people up, from 6.6 million captured in the 2009 census.

With an aggressive campaign by Mt Kenya leaders for residents to turn up for the census, the results showed that the region’s population grew by 1.3 million people in 10 years.

The DP’s expansive Rift Valley bastion has a total of 11.7 million people.

The population of the 13 Rift Valley counties rose from 9.2 people counted in the 2009 Census, representing a growth of 2.5 million Kenyans in the past decade alone.

However, some residents of Rift Valley hail from Central Kenya.

The Mt Kenya region, which has been bragging of having the tyranny of numbers, has already opposed the push for a change of the country’s system of governance from a presidential to a parliamentary structure.

The region’s politicians have said they will reject calls to amend the Constitution to do away with the presidential system, saying they stand to lose out if Kenya adopts a parliamentary system.

The Census figures will influence 2022 political formations as politicians shift their focus to the battle for votes.

The results are also significant because they will be central in the boundaries delimitation by the Independent Electoral and Boundaries Commission expected before 2022.

The figures will also inform the allocation of resources to counties as population is an integral element in determining the counties’ revenue-sharing formula by the Commission on Revenue Allocation.

The population in Raila’s political bedrocks of Nyanza, Western and Coast went up to 16.4 million from the 14.2 million people recorded in 2009 Census, making it the region with second-fastest growth rate after Rift Valley.

However, with the impending death of Raila’s 2017 political vehicle — Nasa — the dynamics in the Western region are likely to shift amid calls for ANC leader Musalia Mudavadi and Ford Kenya boss Moses Wetang’ula to form a single alliance.

On Monday, ANC deputy party leader and Lugari MP Ayub Savula said Western region must now use its numbers to bargain for a fair share of the national cake.

“It is now clear we have the numbers. Our numbers must now count,” he told the Star.

“Western should rally behind one person come 2022. The region should not allow being divided during elections,” he said.

The 2019 Census Report showed that Kakamega, Bungoma, Busia, Vihiga and Trans Nzoia have a total population of 6,022,741.

Ruto has made aggressive forays into Western Kenya and hopes to take advantage of Nasa fractures to make significant inroads as he works on his 2022 presidential line-up.

The DP has declared his intention to succeed the President but Raila, his presumed main rival, is yet to make any public pronouncement about his ambitions.

The DP’s campaigns to woo various regions across the country have triggered speculation about his shopping for a 2022 running mate who can complement and broaden his appeal and fortify his presidential bid.

Some Mt Kenya leaders are already pushing the DP to name one of their own as his number two. Agriculture CS Mwangi Kiunjuri is among those mentioned for the job.

“We will petition KNBS for a review of these results,” Njuki said.

Gatundu North MP Moses Kuria took a swipe at those who ‘manipulate’ numbers — without clarifying the target group or entity, saying, “Figures don’t lie, it is liars who figure.”

Mvita MP Abdulswamad Nassir said they are elated constituencies of Mombasa county have surpassed the required threshold of 133,000 people.

The lawmaker said they had feared of the constituencies would have been lost in an IEBC boundary review.

“We are yet to consult and agree on a common statement as Coast leaders but I can comfortably say we are happy because all Mombasa constituencies are safe,” the MP said.

Turkana South MP James Lomenen whose constituency was among those affected when results were cancelled in the 2009 Census said he was happy with the latest results.

“Turkana will now play in the league of the big boys. In the next election we will have a say at the table of decision making,” he told the Star on the phone.

The KNBS figures put the county’s population at 926,976 people.

Be guided by public interest in your decisions, President Kenyatta tells Judiciary

Njonjo at 100: Power in two governments